The Denakil Depression in North Eastern Ethiopia is one of the hottest places in the world. It is also a hotspot of geological activity where three tectonic plates are pushing against each other forming the Rift Valley. Finally, it is also the lowest part of the African continent, one of the lowest points in the world. Hosting an active volcano, colorful and strange pools created by geothermal activity and metals in the earth and some of the saltiest lakes in the world. Yet, even amidst these extremes, people somehow survive and thrive. It is the domain of the Afar people, who only a few decades ago might not hesitate to kill a stranger. Yet, these days, the area seems to be in the possession of better infrastructure- all thanks to it’s proximity to Eritrea. As new roads and industries emerge, the famous salt miners of the region are facing a decline of their industry with fewer of them deciding to work their camel caravans and a new potash mine threatens the salt pools of suplhur.

Day 1: Climbing the Mount of Smoke

The first day, we drove from Mekele, the capital city of Tigray for almost six hours to the small outpost of Dodom. Here, we waited for dinner to be served and for nightfall to come so we could climb the volcano. The local Afar guides loaded mattresses onto their camels and went ahead of us. 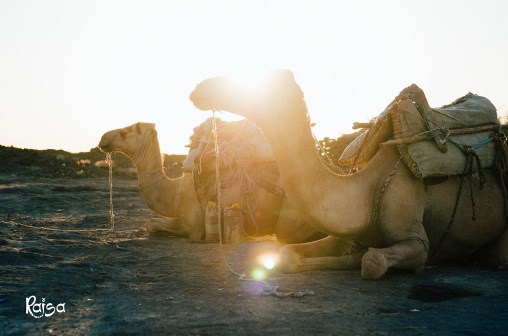 The climb itself was a gently three hour climb although the volcanic rocks were quite sharp! The group was very large and everyone followed at their own pace. We had climbed Erta Ale with the intention of getting close and observing it’s active lava lake- one of the biggest in the world. What we found however was a very active volcano spewing molten lava into the air. As we approached the rim, we watched fascinated. It looked like fireworks continuously exploding into the sky. 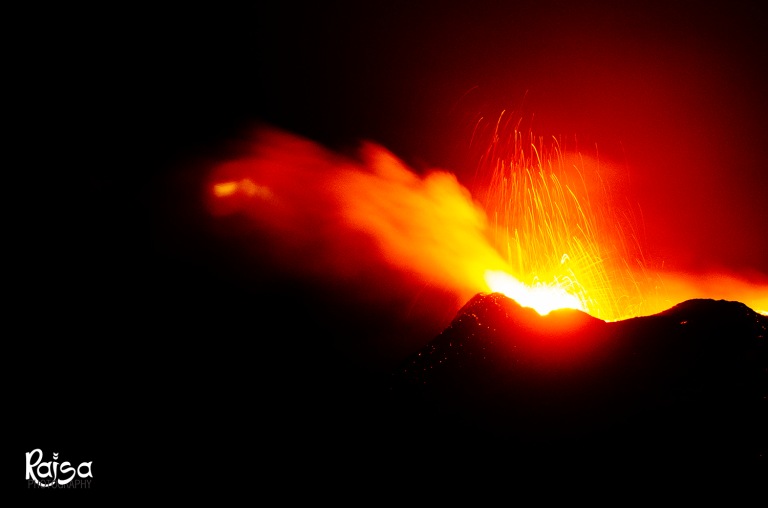 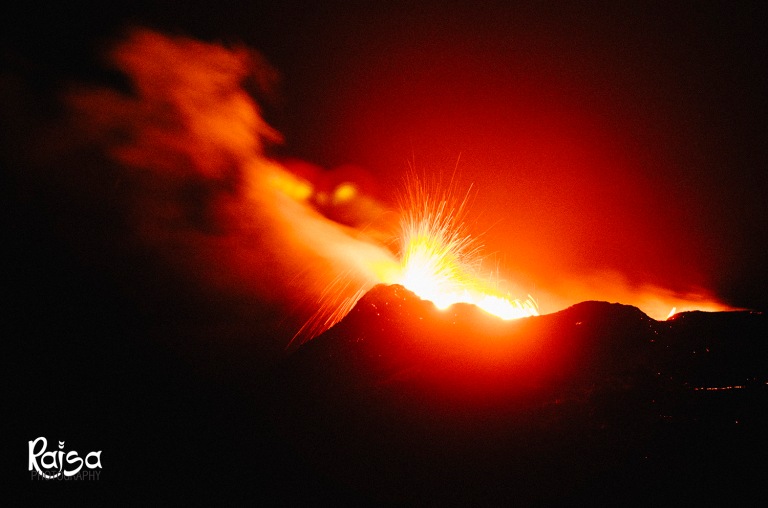 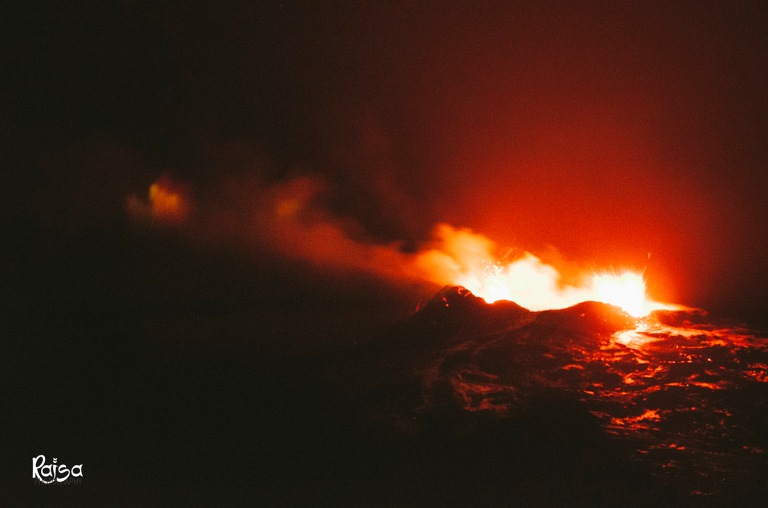 While fascinating, it was about 12am by the time we got up to the top of the volcano and it had already been a very long day. We slept under the stars on mattresses that were placed on the ground. The view of the Milky Way was one of the most fantastic I have ever seen. The volcano glowed red in the background. Nestling into my sleeping bag, I fell into a deep sleep.

Day 2: Floating Away our Aches

We were woken up an hour before sunrise to pack up and go see the volcano one last time. It so happens that the day after we left the volcano, large fissions appeared around the base of the mountain and lava flows started to get of the caldera! It was erupting after more than 10 years and tourists who hiked up to the top had to go back down immediately. I would have been so sad not to have been able to see it after our hike and was glad that we were able to see it in it’s full glory!

The morning hike down the volcano wasn’t very excited but it did feel very long. The volcanic rock gave way to gentle sandy dunes and rock environment. I was glad that we had started before sunrise so the sun wasn’t blaring hot when we got down.

After breakfast and a short break, we drove towards Lake Afdera, a commercial lake where salt is mined. It is one of the most saline lakes in the world and floating on it was a super fun to wash away the grime from our overnight hike to the volcano. I’m still unsure why they don’t make this into a resort of some sort. It was one of the highlights of the trip for me and I would have stayed here for a long time. Lunch was at a small local joint although the food was made by our tour’s chef. After our lunch, we drove towards the small town of Abalaa located a beautiful drive through the mountains and stayed at a local guesthouse. 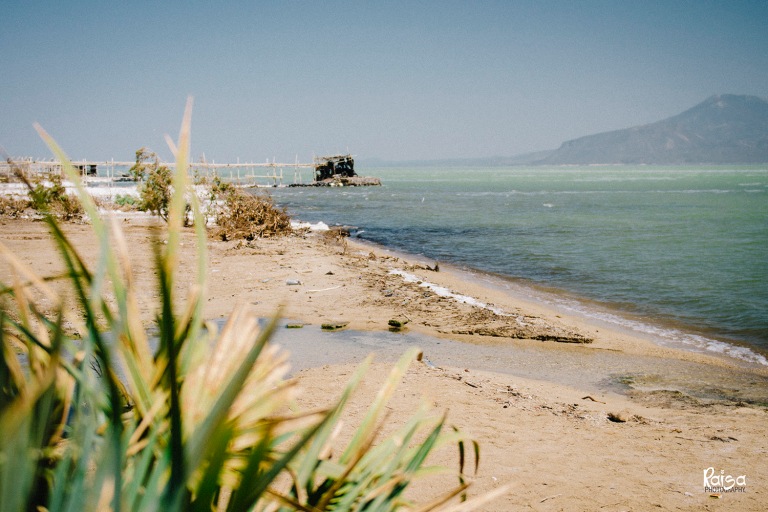 We drove the next day towards the government outpost of Hamedale through some beautiful scenery.

The outpost of Hamedela is composed of a tiny village and of a military camp. While waiting for our guides to take us to the salt flats, we went into the army canteen at the back of the camp, sat down to some cold drinks and watched soap operas with the local military crew. It was a pretty entertaining experience.

Close to sunset, we made our way to the salt flats and lake Assale (not to be confused with Lake Assal in Djibouti). The camel caravans were amazing to see although we did not see any caravans with hundreds of camels like I have heard sometimes happens. To be honest, it was quite tough to photograph these guys- most of them didn’t want to be photographed (most tourists totally ignored their wishes and kept taking photos, which I found to be incredibly disrespectful). These traders walk up to 200km in sometimes 40 degree heat to sell blocks of salt for next to nothing. For the privilege of photographing them, tourists pay tour groups hundreds of dollars but the traders don’t receive anything in return which is quite disturbing. I totally understand why they wanted to be given a little something and I gave them some small change for this privilege. Bringing them some water is also vastly appreciated. Most of the tourists did not even stop to say a simple ‘hello’. One of the tradesmen didn’t take the money from me, telling me that he was happy that I said hello and wished him well on his journey. 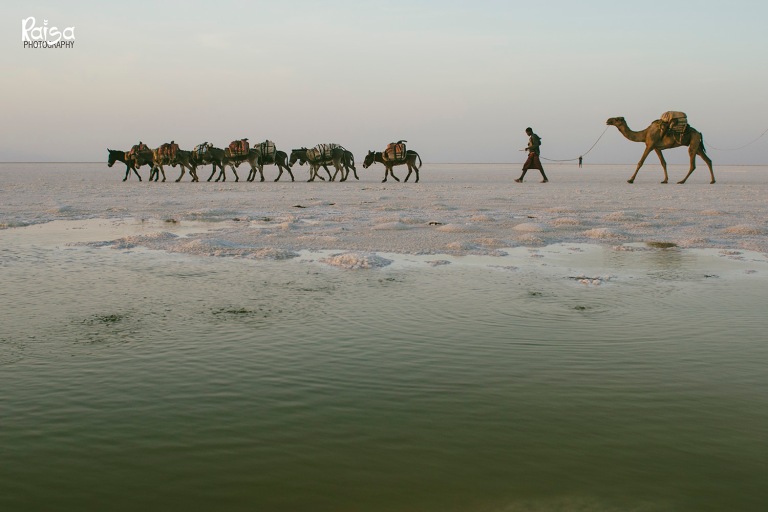 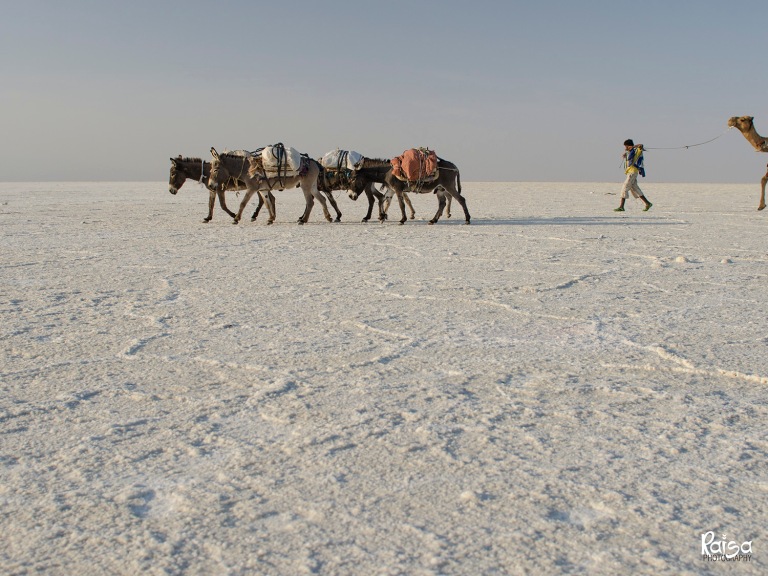 While the camel caravans are the star of the show, I felt bad for the poor donkeys who are also forced to carry heavy loads across the hot salt flats without the benefit of a hump full of water on their backs. 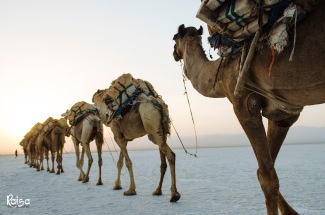 Lake Assale was very pretty as well. I had several cuts and scrapes and walking in the water was quite painful but apparently it helped to keep things clear and cleaned. We were accompanied at all times by members of the armed forces. The salt flats are a mere 20km to Eritrea, a country that Ethiopia had a war with in the 90s and with which relations are still pretty strained. I took the chance to speak with some of the guards. My favourite two guys were Yared and Mohammed. Yared is a soldier from near the city of Lalibela and Mohammed is a local Afar who lives in Hamedale and helps with the tour groups. 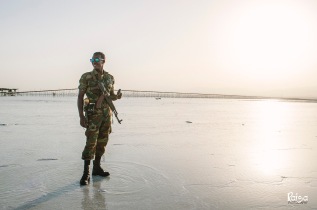 That night, we slept on cots under the stars in the village of Hamedala. I’ve heard that in other seasons, the night temperatures can be quite unbearably hot. A friend of mine who went in June described it as a sauna inside a pressure cooker. We were lucky to go in January. The wind picked up after sunset and I was happy that I had my sleeping bag during the night. (My husband had opted to leave his sleeping bag in the car and somehow managed to sneak into my tiny cot to cuddle at night because he was so cold.) Again, the stars were magnificent and waking up occasionally was worth it because you got to see the Milky Way above you. That said, sine Hamedala is a working village and camp, it was quite loud. I was very glad to have some solid earplugs.

Day 4: The Colored Pools of Dallol

We woke up very early again to go to what I was most excited about seeing: The pools of Sulphur at Dallol! Geysers at the top of a small volcano let out water that has been heated by the earth’s mantle. The spectacular colors are due to different elements- metals and sulphur- that are part of the earth’s crust. It was an amazing out of this world landscape! 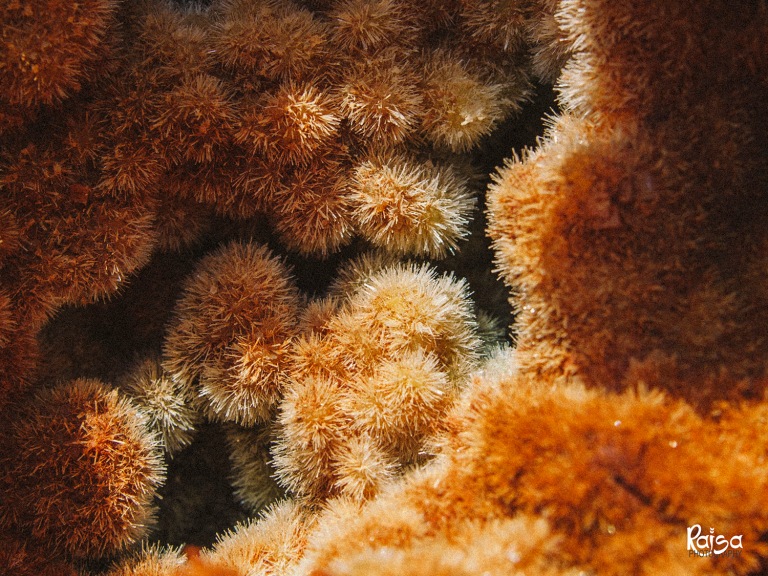 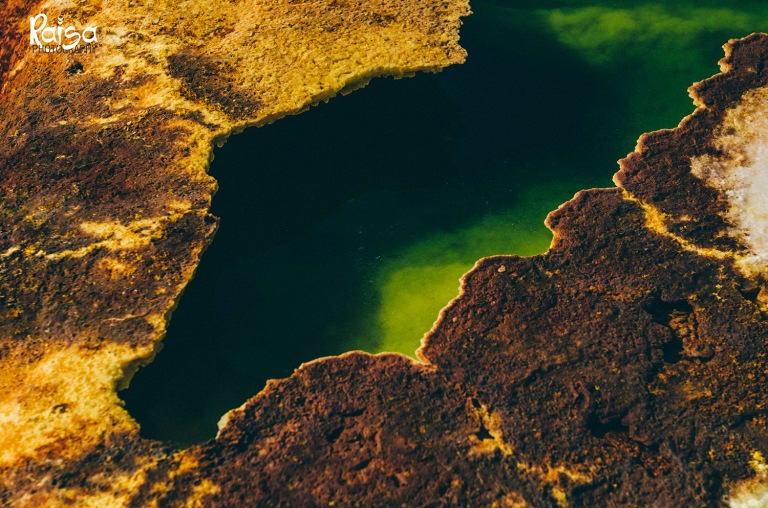 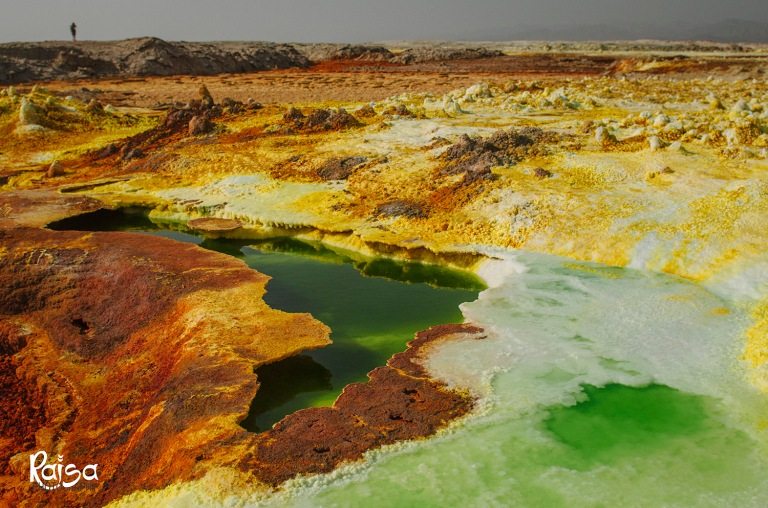 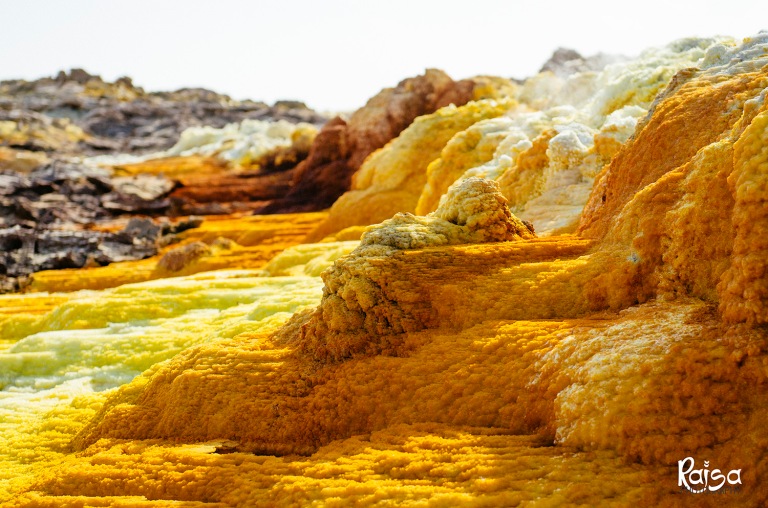 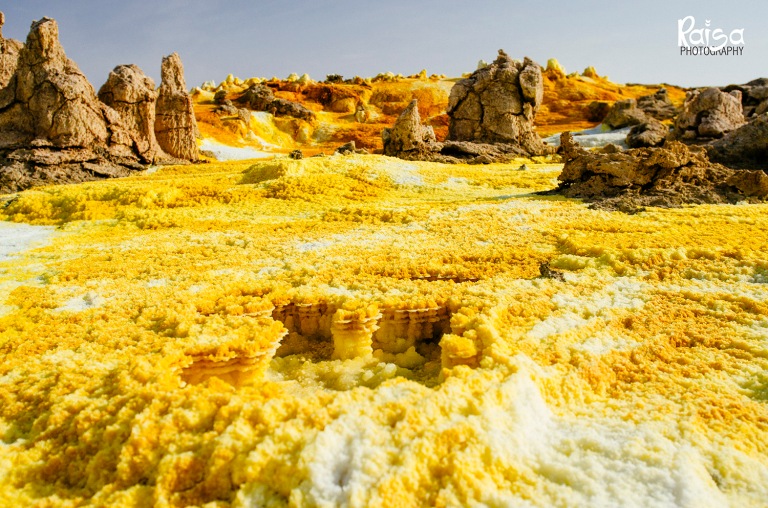 Our hour in Dallol went very quickly. I would have loved to stay much longer. The pools shift every few weeks due to geological activity- so what we saw that day won’t always look like that. I found it just fascinating. I was especially interested by the tiny crystals that were formed in between cracked in some areas. Some of them looked very fragile indeed. Chemistry is amazing!

Finally, on our way back to Mekele, we went to visit the salt miners. Traditionally Afar people who spend their days under the hot sun breaking up the salt into rectangular pieces that they then sell to the traders for about 5 birr/ block which is about .20USD. The sun was hot and I found myself admiring these men for braving the harshest of conditions to mine the salt. In ancient times, this was a worthwhile endeavor as the salt mined here would be brought all the way to the Middle East. With a new industrialized plant on the way that will mine and iodize the salt at it’s source, I wonder how much longer this livelihood will exist. 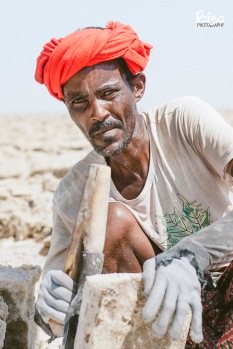 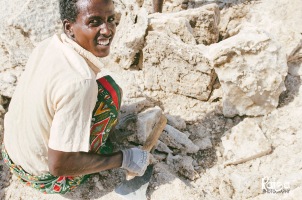 Overall, this was an amazing trip and certainly once-in-a-lifetime. I don’t know how much longer the salt caravans will survive so this will be something I recommend people do sooner rather than later. That said, even if the salt traders’ reducing, seeing the volcano and the colorful salt pools at Dallol is pretty special. An amazing way to explore the outer reaches of Ethiopia and it’s geological wonders.

Tour Guide: We went with Ethio Tours and Travels as we were 14 going and they gave us the best price. Honestly, I don’t think it’s worth spending almost double for a private tour. The locations where people sleep is the same and everyone goes on the same caravans tours. Maybe the food is better with others but I don’t think it’s worth the extra splurge. Save it and spend it elsewhere in Ethiopia!

Flying There: All tours start from Mekele which is an hour’s flight away from Addis Ababa.

Closed toed shoes and sandals for camp and for the car. Hat, sunglasses, a small backpack for walking and carrying things for the hike to the volcano. Music to listen to on the long drives. Bathing suit for the salt lake.

(i) This is a challenging trip for those who are not accustomed to using ‘open toilets’. THERE ARE NO TOILETS. You have to walk in the bush and go at your leisure. Bring wet wipes and a skirt or sarong for privacy. (ii) It is HOT during the day. Like really hot. Don’t forget your sunglasses and hat. Water will be provided by all tours. (iii) The hike up to the volcano was tough for a few people. Have closed toed hiking shoes to help with the sharp rocks and have ankle support to help when descending.

9 thoughts on “Explosive Exploration of the Denaki”

One Day at a Time

I’m a Bangladeshi-Canadian photography fiend. I love to travel and to share images of the places I go. I have been living and working abroad for several years now and travel as often as I can.

All views expressed are my own and should not be attributed to organizations I work for or have worked for.